A Social Media Policy – a Critical Tool to Protect your Firm

Published in AccountingToday (with slight modifications) 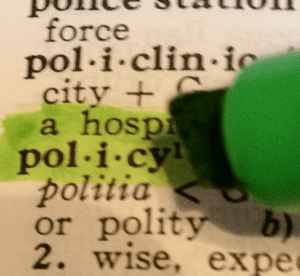 Having a carefully designed social media policy in place isn’t only a matter of establishing standards for politeness; it’s necessary to legally protect your firm and its actions.

Much of business behavior is so entrenched in the culture that it’s learned automatically and taken more or less for granted. One wears shoes. One shakes hands. One is especially polite to one’s clients and supervisors. Social media, however, has thrown a bit of a wrench into the mix. This is partly due to its fairly recent appearance on the business scene – without decades (if not centuries) to evolve, the emerging technologies and their capabilities haven’t yet resulted in a widely accepted protocol.

Other complicating factors stem from the nature of the platforms and the way they give new communication abilities to users. For example, when is social media speech personal, and thus protected by constitutional rights, and when is it representative of the company’s official position? At what point does social media speech become an offense that can legitimate being fired? Questions like these make it mandatory that your firm develop a carefully thought out and legally vetted policy describing the rules for social media behavior both in and out of the office.

Whether you create this document in-house or seek professional assistance, it’s critical to look into all the angles and cover as many scenarios as you can possibly imagine so that you don’t find yourself on the wrong side of the law with future company actions. Consider these two episodes reported by the National Labor Relations Board (NLRB), which is finding itself increasingly involved with incidents relating to social media use.

“A construction contractor fired five employees after several of them appeared in a YouTube video complaining of hazardous working conditions. Following an investigation, the NLRB regional office issued complaint. As a hearing opened, the case settled, with the workers receiving full backpay and declining reinstatement.”

“After a work-related incident, an employee criticized her supervisor in a post on Facebook, which prompted other employees to reply to the posting. The employee was suspended the next day and later fired. The NLRB issued a complaint alleging the employee was unlawfully fired for engaging in protected concerted activity when she posted on Facebook.”

The company in the Facebook case fired the angry employee based on her violation of their social media policy, which forbade making complaints about supervisors on the internet. They thought they were in the clear. But the NLRB’s charge stated that the policy was unlawful in its inclusion of that rule and several others among the company guidelines.

Social media is a powerful tool for business marketing, communications on all levels and plenty of fun (not to mention the copious opportunities it provides for making very public faux pas), but it’s got a serious side that can do your firm a world of hurt, too. Make sure that you’re protecting your firm as you’re providing the guidance employees need to successfully navigate the rules. It’s a lot more complicated than requesting good manners. The ins and outs of the law in this area, as in so many others, do not follow the dictum of mere common sense.

You do need a social media policy and it needs to be comprehensive. Every employee must be thoroughly trained on it, to become familiar with exactly what is expected and allowed. But as you develop and implement the policy, watch where you step, to protect your firm. Now go enjoy a nice, relaxing Facebook moment.

And if you need help with your social media policy, you can always contact us at bbr marketing too.