Are the Elephants Willing to Forget?

Those fun Facebook pictures live on far, far beyond the point you wish they would. Does this mean you can never get past them? Only the voters know for sure.

Social media is awesome. Before its advent, when you got drunk in a cute outfit and performed alcohol-fueled feats of questionable safety or morality, how could you memorialize the occasion? Sure, with a hangover, maybe some bruises and if you were lucky, the admiration and/or taunting of your co-partygoers. (And on some occasions a hospital bill or future offspring, but these lingering effects were rare.) Most of the time, though, all the fun you had and the awful decisions you made simply vanished into the abyss of time and a return to sobriety, with little or nothing to remember them by in later years.

Today there’s almost no risk that your most daring exploits will be lost to history. With instant upload and wide sharing options, your mother may know about that kegstand before you’ve even fallen down! Or your boss. Or your constituents. What could be better than that? Oh – the fact that the kegstands you did before getting the grownup job or winning public office can still make an appearance, fully apprising your current crowds of your past “accomplishments.” And that’s a problem. 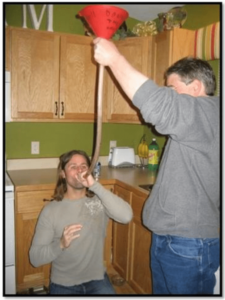 The newest excitement over social media surprises involves Stewart Mills, a Republican candidate for congress in Minnesota. A series of photos that appeared on Facebook until recently documented the young candidate at a party as he enjoyed a beer bong and dramatically licked the lips of a female who didn’t happen to be his wife. The candidate released a statement addressing the photos in question:

“It’s no secret that in the past I’ve let my hair down to have fun with family and friends. My wife and I have had many lighthearted moments in our lives but right now I am focused on my Congressional campaign and the disastrous effects of our overreaching government and sky high unemployment in the north eastern Minnesota [sic].”

Mills is a candidate with high potential to get elected, measured by the fundraising success he’s had so far. He’s a handsome dude with a beautiful and photogenic nuclear family. He’s a Packers fan. And yet, is all this enough to allow GOP voters to get past the fact that he’s a beer bong-loving party monster with a tongue like a lizard? True, it’s not smoking crack like a certain Canadian mayor, but it’s still worrisome for someone running a congressional race, especially as a Republican.

You’ve heard it many times before but it’s worth saying again: don’t do anything you wouldn’t want your grandmother (boss/children/constituents) to know about, period. With social media and digital photography, you have no secrets. Your worst moments are going to become public at some point, like it or not. “But I didn’t mean for anyone to know about that!” Yeah, you didn’t. But they will anyway. “I thought this was a private event!” So did Mitt “47%” Romney. The difference between public and private has been washed in the blood of the little blue bird (not to mention Mark Zuckerberg) to the point that a difference no longer exists. Your only option is to keep your pants on, your alcohol consumption moderate and assume you’re being watched by the very people you’d most like to hide from at any given moment.