When Life Gives You Uneaten Hamburgers: The Marketing Genius of #SadPapaw

The Internet is full of super dumb things, super scary things, and sometimes, super awesome things. Case in point: the story of Sad Papaw. A couple weeks back, Twitter user @kelssseyharmon shared a photo of her Papaw looking a bit down while eating his burger. Turns out he’d cooked twelve burgers for his six grandkids and only Kelsey showed up.

dinner with papaw tonight…❤️ he made 12 burgers for all 6 grandkids and I’m the only one who showed. ? love him pic.twitter.com/0z0DkPtUiR

The photo touched a nerve and the Internet responded, rallying around #SadPapaw and sending him much love, while also looking to track down the delinquent five other grandkids and give them each a good ol’ fashioned whippin’. Not gonna lie, as someone whose grandparents are no longer around, the tweet tugged at my heartstrings and made me want to smack those grandkids upside their heads like in those V8 commercials.

Kelsey later updated everyone that Papaw was fine and that he appreciated the love and support from the thousands of crazy strangers on the Internet. Another grandkid made it to the table, finally, for that hamburger with Papaw, after much online harassment. A little late, but there nonetheless, and the Internet was happy once again. That should have been the end of it, and it was a rather decent ending as far as Internet brouhahas go. But the Harmon family decided to do something wise – they took full advantage of the brief window of fame the Internet had given them. 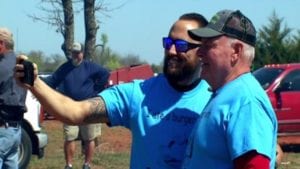 While most viral moments fade away pretty quickly, this one got an extension when Papaw decided to host his very own hamburger cookout. For $2 a patty, you could eat a burger with #SadPapaw, as well as buy your very own “I Had A Burger With Sad Papaw” t-shirt, with the profits from the sales going towards charity and education for his grandkids, even though they’re all ungrateful urchins. In addition, companies like Johnsonville and Hefty sent some of their products to help make sure the event went off without a hitch. News stations covered the cookout, MTV was asking their fans to share their experiences at the event and practically everyone in attendance got a picture with Papaw and posted it on social media.

And now here we are talking about it, along with names like Mashable, Huffington Post, NBC, Fox, you name it. Not only is Kenneth Harmon now the nation’s surrogate Papaw, he’s also a freaking marketing genius. Call it all a happy accident if you like, but he saw an opportunity where the Internet was temporarily focused on him and seized it. With a few tweets and social media shares, he’s now raised money for his grandchildren, created a community feeling and made the Internet a cheery place for a moment. And the fact that he seems to be a genuine, kind-hearted man is the perfect cherry on top.

You may not ever find quite the opportunity that Papaw had, but there are sure to be plenty of chances for you to take your lemons and turn them into marketing lemonade if you pay attention. Papaw took uneaten hamburgers and made, um, hamburgerade, which translates into college savings for the ones he loves. I tip my hat to you, Papaw.