The Business Benefits of Being Brutally Honest

It was the first day of my freshman year of high school. As I sat in my homeroom seat waiting for the bell to ring, a kid walked in and sat down next to me. He was new to the school, and having been the new kid once myself, I took it upon myself to welcome him. As I leaned in to talk with him, I noticed he had a HUGE booger hanging out of his nose. I mean, seriously, it had its own zip code.

I debated saying anything at first, not wanting to embarrass him. But then I thought about how he’d walk around with that thing all day and he’d become known as Booger Boy or something and I didn’t want that to be the first impression he made in his new school. I motioned him to lean in closer and I whispered “you’ve got an incredibly large booger in your left nostril.” He instantly looked very embarrassed, blushing and everything, said nothing and ran to the bathroom. I felt awful and thought, “Well, it was nice knowing him, won’t be talking to me again.” When he came back, sans booger, he plopped back down next to me and thanked me. While he admitted he was embarrassed, he was grateful that I had been willing to alert him when apparently no one else felt comfortable enough to do so. We quickly became friends and were great pals throughout high school and into college. 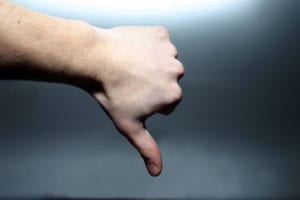 In the business world, professionals are not always comfortable with alerting clients to their “boogers.” When you are being paid, you often feel that it’s your responsibility to keep your clients happy at any cost. And while it’s important to do what you can to adhere to their requests, sometimes they are misinformed or just don’t realize that they are, well, wrong. As a professional, it’s your responsibility to break the bad news. Your clients are looking to you to provide them with the expertise and knowledge they need to be their best, even if that means telling them something they don’t want to hear.

For example, Bonnie once received a postcard invitation for a networking event. She was so unimpressed with it that she was compelled to contact the organizer and point blank stated: “This event seems like such a great idea, but the marketing for it does not give the best impression and you will lose potential attendees because of it.” Instead of being offended, the organization took Bonnie’s advice and made some changes. Now they are a client.

Similarly, we recently received a couple of newsletters from two different sources that almost made our eyes bleed. Like with the postcard, it was great information, but the design was so bad that upon opening it, most readers would be either completely turned off or just not have any interest at all. For the first newsletter, which included an invitation for an event, the sender asked us to revamp it. For the second one, we are meeting to discuss their newsletter and potentially other work. For us, it has paid, literally, to be up front and honest.

There will always be some clients who just want a “yes man” and don’t want to be bothered with what you, the expert, think is best. For those, I can only suggest trying to find others within their organization that will help support any arguments or suggestions you have and learn how to best communicate on their level. There’s also a good case to be made that these clients aren’t a good fit for the committed professional, but that is a personal decision to be approached by the individual.

However, I think most people want to know when they are making a poor impression or if there is a way they can do something better. At the end of the day, they are business people who want to build their businesses, and the best way to do that is to listen when someone is providing them with expert advice. Be gentle when you deliver awkward facts, of course, but keep in mind that a realistic assessment and accurate feedback are part of what clients are paying you to give. We are comfortable informing clients that they have boogers. Can you say the same?

2 comments on “The Business Benefits of Being Brutally Honest”