Stand Out by Targeting Underserved Markets

Do Your Clients Know You Want Referrals? 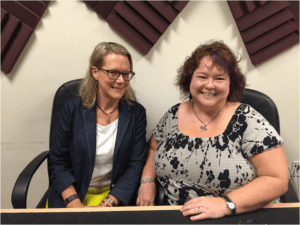 Cheryl Legare of Legare, Attwood & Wolfe sat down with Bonnie and her co-host, Ryan “Redhawk” McPherson, to talk about employment law on Atlanta Business Radio. Cheryl is a partner at the Atlanta firm, which represents employees in discrimination lawsuits, non-compete clause issues, contract negotiations and severance reviews. Her background includes work on the defense side, representing corporations, so she has a good view of both sides of the employment law equation.

The conversation covered a wide range of topics to help business owners stay out of trouble by becoming better informed about the laws that govern them. You can listen to the full show here, or read some of the highlights below.

Cheryl: Companies know what they’re supposed to do for the most part [but] some of the laws are more complicated. The Family and Medical Leave Act, the Fair Labor Standards Act, overtime, [they’re] full of traps for employers. As a business owner, my advice is always err on the side of caution.

Bonnie: I would be a little curious to know what some of these traps are, particularly ADA and FMLA.

Cheryl: Well, the biggest ADA, FMLA trap is which employers that the FMLA covers. First of all, you have to have 50 employees in a 75-mile radius. So employers to whom the FMLA applies think, “Well, once my employee has taken their 12 weeks of leave and they’re still out sick for another month, I can fire them. The problem is that ignores the existence of the Americans With Disabilities Act, which requires or can require that leave of a definite duration is a reasonable accommodation for a disability. I can’t even count how many cases I’ve had for people who have cancer and are in treatment, and their employers say “Well, your twelve weeks are up. Your job’s not protected anymore. I’m sorry you’re still in radiation.”

Cheryl: It does seem harsh.

Bonnie: As a business owner too, I can’t imagine somebody making that decision. But we have talked to businesses and clients who are in difficult situations where they have to make hard decisions decision about running their businesses vs. doing all they can for employees. How do you manage that or balance that?

Cheryl: FLMA is unpaid. So if you’re really in that much of a dire strait, hire a temporary employee to cover while that employee is out. And I absolutely understand that that is not always possible. But I can’t tell you how often I meet with people on FMLA and ADA claims who tell me, “I know they posted my position and filled it while I was on leave.”

Ryan: What’s driving them to do that? Is it the bottom line? Is it the other employees? Who’s making these decisions, and why?

Cheryl: That’s a tough question, right? I think sometimes people assume, “Ah, my employee will be okay, no matter what. And this isn’t the kind of person who would ever sue me anyway.” That is never a good business decision.

Bonnie: That makes sense. And not to delve too far into the political quagmire that we’re in right now, but sexual harassment has been in the headlines in the last couple of days. And I think it is unfortunate that it winds up not being taken seriously when it really is a very serious matter.

Bonnie: It’s more about creating that environment where it’s continual as opposed to one isolated incident.

Cheryl: Or severe, so one isolated incident that’s objectively really, really bad, not just I think it was terrible, but the public at large would think it was terrible. But the statements that were made were offensive to a lot of women and men in that, oh, this only happens to weak women. Well, that’s just not true.

Opportunities for women in the workplace are just not the same as they are for men even now. And a lot of people sort of ignore it and brush it off, because they have a good job, a good income. They’re supporting their family. There’s millions of reasons why people would tolerate it and stay where they are. The comment about “find another job” or “find another line of work,” … Think about it if you ever got to trial and the jury was looking at it. There would be people on the jury who’d think, “Well, why didn’t you just leave if it was so bad?” And so I think his statement was offensive. But I don’t think it was beyond the pale. I don’t. I think there are jurors who believe that.

Bonnie: In so many environments, especially when you’re talking about smaller towns where there are fewer employers…there are so many factors that come into that decision.

Cheryl: Well, and I also think employers need to take it more seriously. An employee doesn’t have to or shouldn’t be afraid to report what’s happening for fear of losing their job. But they are. Most people are afraid of losing their job if they make any waves at work. And setting the proper environment and tone at work is important, where other employees that you bring in will understand this isn’t tolerated. We don’t make sex jokes at work. We don’t make racial jokes at work. It’s not what we do. So I think it’s an obligation of an employer to make sure that’s not happening. And by law, it is. Even if the conduct wouldn’t necessarily rise to the level of being a hostile work environment under the law, it doesn’t mean you shouldn’t take it seriously as an employer. Nip it in the bud. Fix it.

Ryan: It speaks to the culture that you’re implementing as a leader of an organization. As we often hear in the studio, culture is everything. So you don’t want to create that environment that can foster harassment of any kind. And touch on the pay equity part of [the equation] for our sake. That kind of falls into all this too. How do you know when you’re not being compensated fairly based on your gender or ethnic background?

Cheryl: People find out. That’s the funny part about it. Employers think that their employees don’t talk about their salaries. First of all, you can’t tell them not to. And you never should. But the EEOC is about to initiate [something new], and it won’t go into effect until March 2018, but they’re gonna be looking at how much you’re paying within bands of pay: who makes between 25,000 and 35,000 based on gender, race, and ethnicity.

Cheryl: Right? And one of the reasons they’re doing it is because they say that maybe if employers take a hard look and have this in front of them and see, “Oh, look at that. We always pay women less than men. We need to fix that.” That’s really the goal here.

Bonnie: It’s not to punish those employers but to actually make them take a look at it and self-adjust.

Cheryl: [It’s] in a public comment period right now, but if it becomes official, then the first report would be in March 2018.

I think where pay issues come into play, it’s so subtle. I’ve always heard, well, women just don’t ask for the same amount of money as men ask when they get hired. And I’m paying Mary less than Joe, because Joe asked for more. So my advice to women is ask for what you’re worth.

But I think the other thing is unless they actually analyze the information, employers don’t really necessarily know they’re doing it. A lot of times, they do. It’s pretty blatant in some places.

Ryan: I think it’s just the way the whole world is kind of balancing out right now. And unless we become more aware and put more procedures in place, then that’s the way it will be.

Cheryl: There’s some truth to that and there’s implicit bias, right? Speaking from a law firm perspective, there’s a lot of research on the fact that the male partners are evaluating the female and the male associates, and the women are just making less money than the men because, implicitly, male partners are rating female associates’ performance lower than men. And it may not be on objective measures. Most of the time, it’s not. It’s just some subtle and natural tendencies. And so unless you intentionally look at these things, I’m not sure that it’s anything that’s ever going to be fixed.

Ryan: So what are you doing at your practice to instill good culture and make sure you’re treating everyone fairly and avoiding the pitfalls that we just discovered here?

Cheryl: We’re small, first of all. But it was really important to us as a labor and employment firm that represents employees that our employees be happy. So we do things that we’re not required to do.

And I look at a lot of times at employment decisions as do the right thing even though it might not be necessarily the best thing for your business. And I think about that from the perspective of sick employees. So the FMLA may not apply to you and you may have an employee get sick. Do what you have to do for the business, but also remember… My employees are my friends and family. And if my employee gets sick, I’m gonna give them the time off, even though I’m not required to.

If you’re terminating an employee, it doesn’t matter why. Don’t walk them out with a security guard, because the first thing they’re gonna do is get on the phone and call my firm, because they’re gonna think that they were discriminated against somehow or that something’s wrong. Don’t go talking to everyone in your company about your sick employee and why they’re sick.

Communication with your employees can keep them out of my office more often than not.