Marketing at its Best 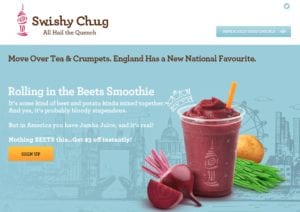 I love creative marketing. We’ve written before about fun campaigns, or situations where companies have reacted quickly to unique circumstances. This is another example of creative, spur-of-the-moment marketing and when I saw it, I just had to share.

If you aren’t familiar with Ellen’s show, you may not realize that one of her frequent bits involves putting celebrities in crazy situations. The way it works is that she wires them up so that she can talk in their ear and they have to repeat whatever she says, typically in a public place and usually with hilarious results. In this one she sends Adele into a Jamba Juice where she has her order a large juice in a small cup, take scissors from her purse and proceed to cut her own wheat grass, and ask her assistant to brush her hair at the counter. At one point, she mentions that she’s not familiar with Jamba Juice but that they have something similar in England called Swishy Chug. Obviously it is made up, but she continues the bit by saying they make something similar using beets and potatoes, which frankly sounds rather disgusting. It’s all in good fun and everyone has a big laugh once it is revealed that they are all part of a bit on the Ellen show. It’s also great free publicity for Jamba Juice.

That’s where it typically ends, but this time the marketing folks at Jamba Juice picked up the gauntlet and ran. Building on the bit, they created a Swishy Chug website within a very short period of time. And they had fun with it too! Promoting their “Rolling in the Beets” smoothie (taken from the name of one of Adele’s most popular songs, Rolling in the Deep), they link to the Ellen bit and include a link to sign up for their “Insider” program to get discounts and a free juice on your birthday. They even created a video called “Hello from the Jamba Side” in which they actually make a smoothie using potatoes and beets, and encourage Adele to come back in and try it.

So what does this mean for professional services marketers? It’s a reminder to have fun with your marketing! Your clients and colleagues love it when you show your personality and poke a bit of fun at yourselves. Don’t be scared to push the envelope here and there; that local small business may be looking for someone like you!