Marketing Lessons from the Pallas Cat

When trying to come up with content to create or share, often people try to think of ground-breaking, earth-shattering or mind-blowing content that will educate the masses and stimulate intellectual conversations. And that’s a good thing. You want the majority of your content marketing strategy to be focused on content that is helpful and informational and shows you know what you’re talking about. But it doesn’t always have to be that way. Not all of your content needs to read like a doctoral dissertation or be rocket science. A perfect example of how content can be simple but far reaching: the Pallas Cat. 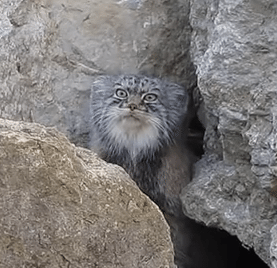 A couple of weeks ago, a video of the Nepalese Pallas Cat started making the rounds online. Some websites caught wind of this video that showed the Pallas cat discovering a camera near its habitat. It was initially stated incorrectly that this was of a wild Pallas cat that discovered a camera trap in the Himalayas. It’s actually footage shot from an enclosure at the Port Lympne Wild Animal Park in Kent, England, but that’s beside the point.

What’s so interesting about the pick-up of this video is how there’s nothing much to it, but everyone just had to click on that link. Sites like HappyPlace by someecards posted on it, describing it as “Old Man Hermit Cats Freaked Out By Encroaching Society,” and The Dodo labels it an “earth-shattering moment” for the suspicious feline. If the video had been titled “The Pallas Cat in His Habitat” or something invoking the idea of education and basic learning, I doubt so many would have shown interest. But that wasn’t the case.

Instead, humor was the main angle and with just 47 seconds of video and no real audio other than the scratch of the cat’s paws and some birds in the background, we now suddenly know there’s such a thing as a Pallas Cat. Prior to two weeks ago, I had no clue this critter existed. I’ll bet most of you didn’t, either. I now know about this cat, where it’s from, some of its habits and I’m interested in learning more.

Your marketing can take a cue from the Pallas Cat. Don’t overthink it, don’t write a book, don’t force feed people info. Sometimes just find something simple that is eye-catching and attention-grabbing and let it inspire people to click and learn more. And sometimes if you want to just post a picture of a silly cat, then heck, go for it. Show some personality and have fun with your content – it’s ok.