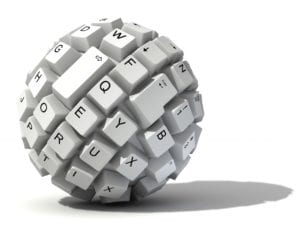 Ever since the dawn of typing, people have wondered why the keys aren’t laid out alphabetically. That way we’d know where to look for them, and after all, the original typewriters patented in 1868 did use an alphabetical layout.

The answer given most commonly is that the co-inventor of the typewriter, Christopher Sholes, strategically placed often-used letters in spots that took more time to reach. His reasoning, so the story goes, is that by slowing down typists with inconvenient letter arrangement he could help them avoid the problem of commonly used keys (and the long levers that controlled them) getting jammed up, which is a thing that used to happen to manual typewriters.

Researchers at Kyoto University refute this theory, stating that the QWERTY keyboard evolved in response to feedback from telegraph operators who frequently used these newfangled inventions to transcribe messages. They had a need for speed and struggled to translate from the Morse code they received onto the alphabetical keyboards of the time.

Whichever theory is true, by 1893 the QWERTY keyboard layout had become the standard that is still in use today. That’s not to say it’s the best option or the only one – not by a long shot.

Sholes continued to refine his ideas for the typewriter, including different keyboards he thought offered greater efficiency. Others did so as well and by the 1930s, a serious competitor to the QWERTY design had emerged in the form of the Dvorak Simplified Keyboard, named after its creator, Dr. August Dvorak. Dvorak placed letters based on a study of human physiology and English letter frequency, striving to eliminate the awkward finger maneuvers and stresses that accompany sustained typing on a QWERTY keyboard.

Once familiar with this keyboard layout, many typists claimed greater speed and accuracy. These claims have been disproven to some degree, but many users felt passionately that it was a superior alternative and reduced the likelihood of injuries stemming from repetitive strain that often plague professional typists. Although it has retained some popularity, switching to this keyboard required an investment in training and hardware that most organizations were not willing to make. In the computer age, Dvorak still exists as an option on many operating systems and devices but never managed to displace the accepted QWERTY standard.

While QWERTY and, to a lesser degree, Dvorak appear most frequently, the smartphone era has inspired yet another round of keyboard innovations. Thumb-typing, as is the norm on mobile devices, isn’t particularly efficient using the old keyboard layouts. The KALQ layout, however, promises greater speed and efficiency on touchscreens. This design is based on a split keyboard, with a pair of 4×4 grids that accommodate shorter, larger digits like thumbs. Preliminary research supports the advantages – some studies indicate the KALQ keyboard allows thumb-typers to enter text 34% faster than they can produce it on a QWERTY touchscreen.

Another strategy for smartphone typing has become widespread already in the short history of touchscreens. Various digital keyboards allow users to swipe between letters, lifting their finger between words rather than after each letter. Purists may scoff, but this style of input is far faster than hunting and poking for tiny “keys,” and once experienced, very hard to give up. For many Android users, Apple’s decision to allow third party keyboards (including “swipe” types) was a necessary move before they would even consider a move to the iPhone.

Path dependency may be more of a controlling factor than efficiency in selecting a keyboard. This means that we’re prone to choose an option based on conditions imposed by earlier decisions instead of what is objectively best. Previous investment in training and hardware, muscle memory and simple resistance to change are powerful forces for a new keyboard to overcome. Even so, as technology evolves and mobile devices become more ubiquitous in daily communications, it’s entirely likely that swiping, KALQ and as yet unseen keyboard styles will dominate and for computer keyboards, advanced analysis will surely lead to brand new keyboard layouts. The question is, when the inevitable happens will you be open to the change?