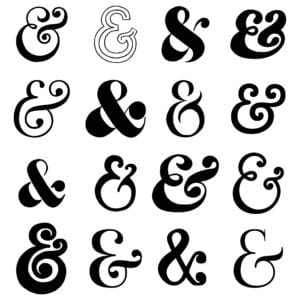 Does your firm’s name include the surnames of a few partners, all joined by the familiar ampersand symbol? Many professional services firm names do contain this common character, which is often emphasized as a significant design element. Everyone knows how to pronounce it and that it’s used to link items in a series, but far fewer know the fascinating origins of this oft-used keyboard key we read as “and.”

The symbol we currently acknowledge as the ampersand didn’t start out with such a fancy, legitimate-sounding moniker. In fact, the symbol itself is over 1500 years older than its official name today. The ampersand first appeared in the first century A.D. in the cursive script written by Roman scribes. The Latin word for “and” is “et” and as usual in cursive writing, the two letters were joined together.

“And” being a coordinating conjunction, it appeared so often that the Latin form of the word endured and was recognized in its original form by speakers of modern English, with the same meaning. It’s easy to spot traces of the symbol’s roots in certain typefaces once you know what you’re looking for. Type an ampersand using the italic version of a font like Caslon if you want to see for yourself.

Later, as English grew and spread in England and the Americas, the symbol became a shorthand version of the original word. This was such a common practice that the ampersand was often considered to be the 27th character of our alphabet, still used and pronounced as the word “and.” The name ampersand didn’t appear until a couple hundred years ago.

How this ancient symbol picked up the name that sounds so impressive and legitimate to our ears is a story itself, and a wonderful example of the way language evolves to regard as standard what purists typically first regard as laziness, disrespect of the mother tongue and a harbinger of the imminent collapse of civilization.

When young students in the first half of the 19th century were learning their letters and dutifully practicing the alphabet, they would finish their recitations with “…X, Y, Z and by itself, and” (the 26 letters we know and the “and” that was accepted as number 27 at the time). But in keeping with the style of the time, the performance closed with “…X, Y, Z and per se and” (“per se” being one possible Latin translation for “by itself”).

Apparently the youth, notoriously lax about proper enunciation today, were no more diligent about such things even in the 1800s. Can you start to hear it? When the kids said “and per se and” enough times it all began to run together, eventually morphing into today’s “ampersand” and becoming accepted as a valid part of the lexicon as a single word.

Is the transition a sure sign of decline and fall for the Empire? Perhaps, but it’s also a pretty cool story. More to the point, it’s the missing link between the “et” of classical Latin and the symbol known as “ampersand” in Doolittle & Billum. And now you know more about that cool scrolly symbol in your own firm’s name!