The Grammar Geek Goes for Broke

The flurry of excitement surrounding BBR Marketing’s series on the niceties of grammar and punctuation has been gratifying in the extreme. We knew there were a slew of people who cared desperately about such matters! So now that we’ve got our language lobes all limbered up and are bursting with enthusiasm and positively seething with anticipation, we’re hitting hard. Yes, today we’re taking on…drumroll please…the apostrophe.

One of the wonderful things about punctuation is the way a few simple symbols can convey such nuanced detail about the meanings of words they accompany. The noble apostrophe is one of the finest, able to work with almost any crowd, never demanding its own key, and not complaining about having to perform double duty. Think about it for a minute – what other symbol can do that? It lets you know “There were other letters or numbers here, but I’m covering their shift for them” in contractions. In other contexts it becomes the prime, the single quotation mark or the okina. Forget those. What we’re dealing with today is its most common and most heinously misunderstood use: to show possession. While the apostrophe can perform myriad functions, leaping from grammatical crag to punctuation peak like some particularly agile Alpine ungulate, the one thing it cannot, should not, must not do is indicate a plurality. I am amazed at how often I see CPA’s used to refer to a group of accountants rather than something a particular accountant owns. This is simply wrong! I can hear the outraged cries from here. “What? What?? Surely you jest! I see this all the time, how can it be wrong?” Luckily, in English we have a foolproof technique for expressing the concept of plurality: the letter s. Apostrophes don’t add to the power of this letter, they only show that something belongs to the person or object in question. This is the strategy to employ for normal words, words that end in a sibilant sound, abbreviations, acronyms, obscenities, slang, technical terms, compound words, official titles and every other possible thing you can write.  Let’s take a look at what this miracle of punctuation can do, shall we? 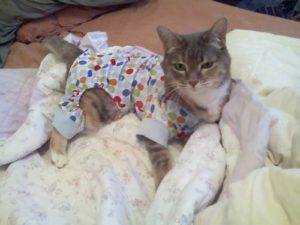 Something that belongs to the objects that belong to the objects that belong to more than one cat can be accommodated too, as in, “The cats’ pajamas’ polka dots’ hues were far too gaudy for such a somber occasion.” If the cats are the companions of a cabal of CPAs or attorneys general, the rule remains the same: The Attorneys General’s cats’ pajamas’ polka dots’ hues are looking a tad more subdued today.

“Then why was I so convinced that adding an apostrophe was the way to do it?” The depressing answer is that apostrophe-mangling has become such a ubiquitous sport that you are unlikely to read a single website or take a trip to the grocery store without seeing it done wrong. From CDs to cantaloupes to today’s specials, you will see what should be a plural used with an extraneous apostrophe more times than not. I’ve even heard rumors that MS Word changes any plural abbreviation to the possessive form, and although the versions I use don’t do this, I can’t prove it doesn’t happen. This is why we must all be vigilant about our own usage, in hopes of slowly shifting the balance in favor of correct punctuation.

“But aren’t there any exceptions?” I’d like to say no, but in the interest of full disclosure I will share that there are exactly one-and-a-half exceptions of which I am aware. Some, but not all, style guides allow the use of an apostrophe to indicate the plural form of single lower-case letters, as in “Mind your p’s and q’s,” or “Mississippi has four s’s.” It is also acceptable (but not mandatory) to use an apostrophe that would normally be forbidden in the phrase “do’s and don’ts.” This last example is an odd one because adding an apostrophe to the “don’t” portion would be bad and wrong, but it’s okay on the “do.” Presumably this is to prevent the more easily misled readers from believing the topic under discussion dwells on correct and incorrect protocols when using an old-fashioned method of communicating with one’s computer. I look askance, but grudgingly accept. There do exist guides that call for an apostrophe in other cases. They are wrong. Fight against this reprehensible act with all your might.

It’s not easy, I’ll admit. It’s hard to follow the rules when all your friends are leaping lemming-like into the abyss, but it falls to each of us to hold fast and do our part to stem the tide of apostrophe abuse. If you run into trouble, just ask BBR Marketing for a little help. We understand.

3 comments on “The Grammar Geek Goes for Broke”