I’ve been devoting a lot of thought to social media lately between reading articles about it, writing some myself, helping manage it for clients and handling my own accounts. 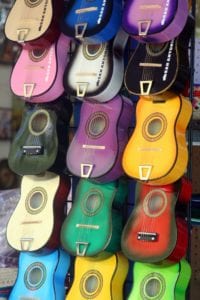 The result was that my brain helpfully carried on without me as I slept, entertaining me with a long and involved dream last night about hanging out with my kids and Jon Stewart as we tried to learn to play the social media guitar. It was an enticing instrument, fun to hold and hear, but tricky to master for the sound we wanted. Jon and I struggled in getting all the strings to coordinate – there were only the usual six (labeled Twitter, LinkedIn, Facebook, Branchout, Blogging and one whose label I couldn’t read) but getting them all to play the right note at the same time seemed an impossible task. Played well, it made far-reaching music that really haunted the listening audience. Played poorly, we got a choppy, cacophonous jangle surrounded by noisy feedback. I’m forever amused by the way the subconscious comes up with perfectly apt metaphors, and this one struck me as brilliant. Social media IS an exciting albeit challenging instrument! But what are the techniques that make it sing rather than squawk, and is it okay to just put the thing down and walk away?

I’ve wrestled with these very issues in recent days, as I noticed that my own social media behavior failed to match the advice I read and write. Updates are done irregularly and without careful thought, my profiles are in various stages of incompletion and I don’t screen my posts for mass acceptability. In fact, I resent the increasing lack of distinction between business and personal networking space. Yet I choose to actively use my personal pages for sharing exciting work events, so I’m creating the problem at least as much as it’s being foisted upon me by the changing times. I have clung to the position that social media is a right and a toy rather than a responsibility to be met consistently and with professional quality. At the same time, I’m constantly reading and observing the clear fact that it’s mandatory for success and can no longer be ignored or handled carelessly. This WILL go on my permanent record, dammit.

At least I enjoy social media and am somewhat literate about its use. Plenty of people hear the message but really dislike the concept, have no idea how to begin or carry an intense unwillingness to open that whole can of worms. What about them? And what about the sole practitioners who have to choose between creating and maintaining a stellar social media presence and delivering quality work to clients? There simply aren’t enough hours in the week to do it all, sometimes. If you can’t manage it yourself you’ve got to pay someone who can, so you can be a part of the conversation. I think of it as a kind of non-optional culture tax we’ve accidentally imposed on ourselves. But social media has reached the point that those who don’t use it are now a fringe element. Not participating at all means trying to succeed in a non-traditional space, since social media is standard operating procedure for businesses and clients alike.

Though only a few years old, social media as a construct has revolutionized the way people communicate and do business. It’s not going to go away. Oh sure, the vehicles will change. Facebook and Twitter dominate the digital networking space today, but there will be others. My guess is that Facebook will slowly recede over the next decade and Twitter will expand massively. LinkedIn is likely to grow, and Google+ might become a power player or disappear altogether. Some as yet unseen platform will emerge with sweeping popularity. Whoever the players are, the field isn’t going to be empty again.

Our resident experts, Bonnie and Kelly, are amazingly proficient on the social media guitar. They can visualize entire sonatas, composing masterpieces that use exactly the right strings for your business to create chords that resonate with lasting beauty. Even these leaders in the field, though, will tell you there’s always a new trend or update to master. It’s an ongoing learning process for every participant. There’s just no way to permanently master something so complex while it’s still in an embryonic stage. Choose your experts wisely, as there are an awful lot of self-proclaimed social media gurus out there without a clue. Keep in mind, however, that there is not an expert on the planet who can honestly say that he or she has achieved total mastery of an area that’s half-baked at best.

So tell me, what is it you dream about?