Words You May Be Using Incorrectly

We’ve all been guilty of it at some point – using a word incorrectly. Sometimes you know better and you’re just going with the flow. Sometimes, it’s just simply because you never knew what the word actually meant to begin with. For example, when you see or hear the word “jihad,” you may assume it means “war.” In reality, it actually means “struggle,” but because the word was brought to most English users’ consciousness by terrorists, many people jumped to conclusions and have been using it incorrectly ever since. 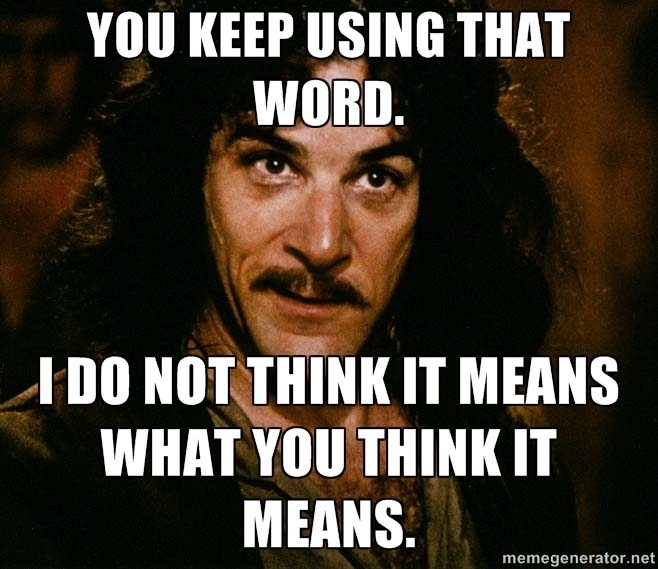 So whether it’s because the original meaning has been lost to slang and colloquialisms or you’ve just been too busy to learn the actual meaning, there are plenty of words we can help you conquer. And once you’ve learned the proper meanings and usage of these words, you can then become that annoying person who corrects everyone else around you. You’re welcome.

LITERALLY If you ask people which misused word annoys them the most, this is usually the first one mentioned yet it’s still used incorrectly far too often! It means that something can actually, physically, in reality take place or occur. Most people use it incorrectly thinking it adds striking emphasis, but they are so wrong. If someone says something like, “I was literally blown away by her comments,” the other speaker has either some major bad breath or some freakishly powerful lungs, because it means this person went physically rolling away like a tumbleweed the moment the other one opened her mouth.

IRONIC After the word “literally,” it seems that “ironic” is the next most annoyingly misused word in the English language. We can partially thank Alanis Morrisette for that (though some girls have helped her out and fixed her incorrect usage of the word ironic). Irony is humor, often wry, based on a discrepancy between what exists or happens in reality and what is expected. Often, however, people use the word incorrectly when they mean: obnoxious, coincidental, annoying, tragic, inconvenient or any number of other words. This situation is not ironic; it is merely annoying and obnoxious.

PERUSE I’m a little embarrassed to admit I’ve been using this word incorrectly my entire life. Most think it means to skim or quickly glance through something. In reality, it means you go through something thoroughly and carefully. Who knew? Not me, obviously.

NAUSEOUS Again, another word I’ve been misusing. Many use the word “nauseous” when they actually mean “nauseated.” Nauseous means to cause nausea. Nauseated is a state of being and means you are feeling like you’re going to vomit. Can you be both nauseous and nauseated? Yes, but if you’re nauseous, it means you’re making others sick and you should probably shower or something.

PRISTINE You’d think it means something super clean and in perfect condition, but you’d be wrong. It actually means to be in an original, unaltered state. For example, a messy-looking prehistoric swamp with critters crawling everywhere and gases bubbling up would be pristine, as it’s in its original state. If you mowed it over and landscaped it to look like the White House lawn, it would be clean and pretty, but not pristine.

DECIMATE I learned about this one in my high school Latin class and have been secretly making fun of people misusing it for years. (Yes, I am a nerd. I took three years of Latin in high school and I enjoyed it.) Often, it is used to imply that something was destroyed completely or significantly reduced. For that, you should actually say “devastate.” Decimate is based on the Latin term for the number 10, so decimate means that something is reduced by 10 percent. To get really technical, it stems from a Roman military method to punish mutiny or bad performance where a tenth of soldiers would be beaten or killed as punishment. So I guess it makes sense that we’d bastardize that meaning over time. It’s kind of dark and super specific.

NOISOME This one is a fun term for me. You see the first part of the word and you think it has to do with sound, but again, since this post is about words we use incorrectly, you are wrong. It actually relates to a different sense – smell. It means something is particularly foul smelling or noxious. In fact, if you look up “noisome” on Dictionary.com, the synonyms listed include fetid, putrid, rotted, stinking and mephitic. (And you’re welcome if I’ve just taught you another new word – “mephitic.”)

DISINTERESTED When people say they are disinterested in something, they most likely mean uninterested. Disinterested basically means you don’t really have an opinion one way or the other, the subject doesn’t really elicit much of a reaction either way. Uninterested means you are definitely not interested, don’t wish to pursue, etc. Pretty straightforward but also pretty misused.

BONUS WORD: TERRIFIC I’m sure you’ve heard the comment, “If horrific means something is horrifying, shouldn’t terrific mean something is terrifying?” Well, originally, it did. This is one of those words with a definition that has changed over time because of chronic misuse. Nowadays people use it to describe things great, over-the-top or amazing. So you’re not really misusing the word, given the evolution of the definition. I just thought this one was interesting to throw in.

I’m sure there are many, many more words out there that could easily be added to this list. If you’ve got a few that drive you bananas when you hear them misused, comment below and let’s keep this list growing!