by Sarah Warlick, copywriter and editor

We’ve stressed the importance of a solid social media policy in the past. Here’s another example of an organization learning too late that creating and enforcing a policy is a must.

Many companies who use social media professionally, as well as those who aren’t there yet, think that for some reason they don’t need to have a formal policy outlining acceptable use. Some may believe that since they’re not using the tool as a company, they are immune from fallout in response to the actions of their employees. Others hope that simple common sense and the good manners of their team members will protect them from complications arising from social media missteps. 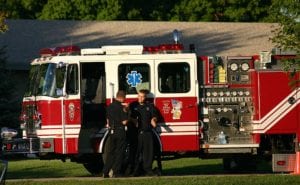 An article detailing one fire department’s come-to-Jesus moment sent to us by a beloved and alert reader illustrates the fallacious nature of such a mindset. As this example clearly demonstrates, no organization is removed from the effect of social media behavior, however fervently you may wish to believe that to be the case.

The incident in question involves members of the Bel Air Volunteer Fire Company, a worthy group that surely shouldn’t have to concern itself with such timely pop culture issues as social media policy, or so they thought. It seems that a firefighter posted a comment on Facebook that shared his mild resentment at being treated differently than other community heroes:

“Even when myself and a full engine crew are in turnout gear at Sonic for lunch, the manager still says only police and military get discounts. Cool, thanks we appreciate the support.”

His tone may have raised a few eyebrows but the sentiment is understandable. The problem arose from responses posted by other firefighters, who suggested revenge was in order:

“Let’s make sure they don’t get a response,” and an idea to “go set the Dumpster on fire.”

Public outcry ensued and the Fire Chief quickly suspended the offending posters. Curt Varone, the fire company’s attorney, pointed out the problem faced today not only by volunteer organizations and public firefighting groups but by every kind of business or association. “You have this issue of off duty conduct. How much can you control off duty? Can we prevent our employees from engaging in social commentary just because some people find it offensive?” As more organizations begin to understand their vulnerability in the social media age, they are creating policies to establish rules and educate their members and staff about acceptable use. Varone has helped several dozen fire departments write social media policies over the past few years, each as unique as the individual group it governs.

With social media pages now in the possession of nearly everyone, some for as long as they’ve been reading, sharing events and personal responses to them has become automatic. What this means for organizations is that your people are going to post and their content and attitude is going to reflect on your group as a whole. Ultimately, every single human group is going to have to create and enforce a social media policy or risk unfortunate and very public consequences after some member posts something unwise, inappropriate or illegal.

It’s an inconvenient truth. The Bel Air Volunteer Fire Company spends their time protecting the community from real and immediate danger and training to do their important job even better. They thought their resources were allocated wisely, focused on only the things that were relevant to their actual utility. But they inadvertently found out the new reality: absolutely every kind of organization, no matter how established and non-media-centered, has to tackle the job of establishing guidelines and consequences for social media behavior.