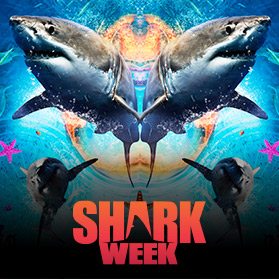 Did you know that it’s Shark Week? Of course you did, how could you not know, it’s all over the place! And I’ll wager that awareness isn’t solely through the marketing and advertising efforts of Discovery, the home station of Shark Week. When Shark Week first launched in the summer of 1988, it captured the attention and imaginations of people worldwide. Only a little over a decade removed from everyone’s favorite feel-good family beach movie Jaws, audiences tuned in to learn about this feared and often misunderstood creature. A phenomenon was born.

But while researchers and scientists are always discovering new things about sharks, you would think that 28 years into this we would at least know enough that Shark Week wouldn’t still be so popular. And yet it is – we can’t get enough! Not only is Discovery aware of this, so are advertising and marketing teams all over the world. Each year, the hype grows as more and more brands and companies ride the coattails, nay, the shark tails of Shark Week. We’ve espoused the benefits of blogging about the latest news and events in order to take advantage of the bandwagon effect, and many companies are taking that concept and running with it via content on social media, newsletters and blog posts that shamelessly try to find a way to make Shark Week work with their focus (ahem).

Should you try to capitalize on Shark Week? If the water shoe fits, then yes, by all means, find a way to incorporate Shark Week or other popular events and themes into your content and marketing, just don’t force it. It’s great to take advantage of popular hashtags, but it’s even more important to make sure they don’t run counter to the values, culture and voice of your firm. As long as you can comfortably say Shark Week jives with these, then I give you my blessing – go forth and be sharky!

If you’re not sure what to do, here’s a few examples of what some brands and folks on Twitter are doing, to help get your creative juices flowing. Some are smart, others are dumb but hilarious and I’m including them anyway. The lesson here is that you don’t need to recreate the wheel or come up with something super deep and thoughtful. Sometimes a quick morsel that shows your firm’s personality and works with Shark Week (or whatever the current It thing is) is all that’s needed.

Don’t see your favorite Shark Week-themed tweet or advertisement below? Link to it in the comments and we’ll update the post!

Our #SharkWeek plane is all over the map! “Migrating” over 5K miles, this is what happens when #SharksTakeFlight!https://t.co/qZOcchwb69

Still one of my favorites. ? #SharkWeek https://t.co/z3kTnCd0wZ

Are shark attacks really on the rise? (Bonus: How to fight off a shark.) #SharkWeekhttps://t.co/oxfp3WdPjl

Sorry, did you guys say it was #SharkWeek or #ShaqWeek? We heard @Shaq Week. https://t.co/OjzCxBtx5K pic.twitter.com/RakYmsMLjA

Can’t stop laughing at this. Who’s excited for #SharkWeek? pic.twitter.com/ocXpMCQZoi

Oh how the tables have turned #SharkWeek https://t.co/7YVutrycBs

Did someone say #SharkWeek? RT if you think Sharpedo should get a cameo! pic.twitter.com/UjlaYRT3KJ

When #SharkWeek makes u paranoid https://t.co/k9NFKObU7I