What We Learned Today: Zombie Loyalty

We’ve stressed repeatedly the need to have your copy checked by others before you share it, pointing out that the more eyes scan it, the better your chances of catching mistakes. You get it, no doubt, but did you know that the same principle applies to logos and other graphic content?

But it’s easy to spot typos in graphics, right? There are so few letters it would be silly to waste time having that kind of thing checked by more than a single person, or at most two! That may sound reasonable but if you believe it you’re wrong. Terribly, terribly wrong.

Even more so than text, graphic content is subject to varying interpretation by individual viewers. Words can be construed different ways but graphic images take that phenomenon to a whole new level. Think back to the way you always saw a monster, flower or Zeus in the cracks in the living room ceiling when you were a kid and you’ll begin to get the idea. Your brother, if you recall, insisted that the cracks actually formed a giant rabbit. Your sister claimed it was a rocket and your mom, bless her heart, insisted pointlessly that she saw a chainsaw.

Obviously you people were nuts, but that’s the way brains work. We process images we see until our brains assign them meaning, and the intent or accuracy of this meaning is utterly irrelevant. Once seen, the interpretation remains a permanent fixture in the mind’s eye.

Chicago Bulls logo…or is it something else?

Why is this relevant for your marketing? Because once your contacts see something silly, inappropriate or merely distracting in the graphics you have painstakingly designed to represent your firm they will remember it forever. And it’s a mistake to underestimate the vagaries of human imagination when it comes to finding accidental patterns or attributing representative significance to images.

For example, have you ever checked out the Chicago Bulls’ familiar icon upside down? Take a look.

Why, it’s a robot sitting on a bench (or some crassly suggest a toilet) as he focuses intently on the book in his lap! You might remember this discussion from the Bulls’ heyday, back in the ‘90s. If you missed it then, be warned that now you’re aware forevermore you’ll see that seated robot reading a book. 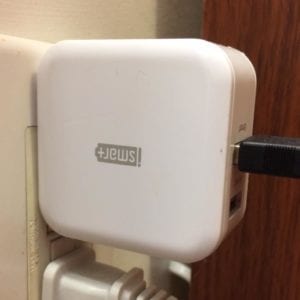 ismar+ charger in use

Sometimes stylized letters or numbers create confusion. Just what do the shapes say, besides your intended message?

The ismar+ folks most likely had no desire to bring up religion or ethnicity when they designed their logo, yet it’s easy to see why someone might think they did. Plug in one of the company’s chargers, which changes the orientation of the logo, and tell me what you see.

+Jews! Is it advocacy? Nope, just an accident, as far as anyone knows.

These amusing mishaps are a perfect illustration of the importance of checking your graphic content from every angle. Careful scrutiny isn’t enough, though. To save yourself all kinds of potential embarrassment, you’ve got to make sure to involve lots of people from different social and demographic niches. After all, it’s no help checking your stuff if the screening crew isn’t hip to the secret meaning of a word or symbol that might appear.

Sometimes it’s less secret and more blatant. As professional marketers, we think we’re pretty savvy when it comes to designing and checking content for hidden messages, and we’ve been confidently using our large, branded and custom-designed booth display at conferences for a few years now. 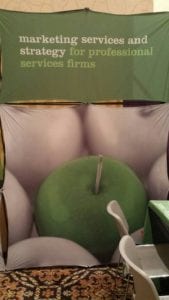 We invariably learn a lot and enjoy meeting people as we talk shop with the attendees and other exhibitors. The one thing we didn’t pick up on, until it was pointed out to us in no uncertain terms at the AAM show in New Orleans, was that our attractive graphic with round, ripe apples sort of…kind of…maybe…looks a lot like boobs. Complete with nipples and cleavage.

Yes, we are currently an all-female firm. But at no point did we have the slightest interest in making breasts a part of our marketing platform. Far from it. So how could we have missed this giant, glaring bosom staring us in the face? The fact is, we checked the image ourselves and invited colleagues and friends to check it too. What we didn’t do is ensure that the viewers included a complete cross-section of America. Our image-proofing group included people of varying ages, genders, ethnicities and professional backgrounds. It did not, however, contain a single heterosexual male, and apparently it should have.

So there you have it. Pay attention to your images, and get as many people as possible to do so too. Just make sure to look from all angles, even the pervy ones.