Just yesterday, Sarah posted on the bbr marketing blog about how some folks got their feathers ruffled over the somewhat suggestive name of a local chicken farm, Locally Laid Eggs. In this post, she explains that in some instances, incorporating a bit of edgy humor can do wonders for getting the word out, though there’s always the risk of offending. It’s a fine line some walk when they’re trying to make themselves stand out in a crowded marketplace, but doing so successfully can many times pay off in big dividends. 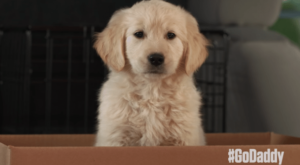 Personally, I love marketing and advertising that tries to work in a bit of tongue-in-cheek content or dark humor, but I know I’m not representative of everyone else. So when I heard there was a kerfuffle around the GoDaddy Super Bowl puppy ad, I was intrigued. (An aside: I despise the fact that Super Bowl ads are now released online prior to the game, it takes half the fun out of watching live for those of us without a team in the championship. And for us Falcons fans, that’s pretty much every year. But I digress…) So I watched the ad. And I giggled. It’s so over-the-top wrong I found it amusing. But again, I’m not like almost everyone else it seems.

The response was a landslide of negativity and outraged comments directed at GoDaddy.com. “Puppy mills aren’t funny!” “Who would dare just sell a dog online without vetting the buyer?” “GoDaddy puts puppies loose in the backs of trucks, how dare they!” I’m paraphrasing a bit there, but that was the general sentiment and boy did people make their voices heard. To their credit, GoDaddy.com listened. They’ve yanked their main Super Bowl ad and have even gone to their blog to clarify and to let everyone know that Buddy the puppy was adopted by one of the GoDaddy.com staffers. Not exactly a direct, “We’re sorry,” but still a pretty decent mea culpa.

What lessons can we learn from the GoDaddyPuppyGate? First and foremost: You don’t screw around when it comes to cute puppies in peril! Next, while there are plenty of us out there who get a kick out of dark or over-the-top humor, it would appear that most people don’t. Especially when it relates to a subject that is completely innocent in nature, like cute fluffy puppies. It’s one thing to be silly, but quite another thing to seemingly support the idea of churning out puppies for a quick buck with no concern or thought to their well-being, as this advertisement implies. After reading through some of the comments, I can definitely understand people’s concerns.

Additionally, even though it was GoDaddy.com that made the bad choice to begin with, they didn’t just try to cover their tracks when people got mad. They listened, and while they may not agree with the overall sentiment, they decided to let the public (to whom they are marketing) dictate their message. We don’t recommend you just fold whenever someone is unhappy, but when you have an overwhelming message like the one GoDaddy.com received, it does take guts to go, “Hey, you know what, we screwed up here, we’ll fix it.” Fewer and fewer organizations are willing to do that these days, so when it’s done and done correctly, it can be a great way to build loyal customers and generate positive vibes.

What do you think? Do you feel the GoDaddy.com Super Bowl puppy ad went a bit too far? Or do you think those who were the most upset just don’t get it? And has GoDaddy.com done enough to redeem itself? We’d love to hear your feedback!