On Twitter, you may have noticed a little orange box with an arrow next to some accounts and tweets. This indicates that a particular item is a promoted trend, tweet or account. Since the inception of advertising on Twitter, these promoted items have been reserved for larger businesses like major brands, upcoming movies and professional sporting events. Last week, Twitter officially announced its new advertising platform that targets small business accounts, allowing them to begin promoting themselves in searches and trends. 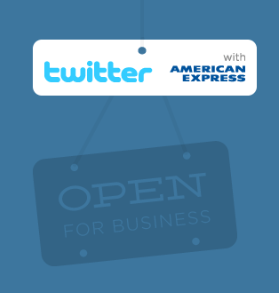 This new small business advertising opportunity is done in partnership with American Express, a company known for supporting small businesses, in part because of their site, OpenForum. In fact, the first 10,000 eligible American Express cardholders will receive $100 in free Twitter advertising. The new platform is scheduled to start in late March.

According to a CNBC article on Twitter’s expanded advertising, users will login using a self-serve platform that allows small business owners to target potential customers and clients using geography and a pre-set budget. Performance determines how much a small business owner will pay. Much like advertising options offered on Facebook and LinkedIn, Twitter only charges when a click generates a new follower or online engagement.

Until now, the big names would duke it out over whose promoted account, tweet or trend would be on top. Now that small businesses have access (and $100 in free advertising each), will our feeds be flooded with promoted tweets? I think you’ll see more for topics that were never promoted before, but I don’t think you’ll be bombarded. Remember, the advertising is targeted and not just thrown out like buckshot. So if you are a 30-year-old woman, you won’t get the promoted tweets for balding remedies. If you register in time to get the $100 from American Express, I suggest you give it a try and see how it works for you. We are. Once we have analytics on our advertising, we promise to update this post. We hope you’ll return and leave us a comment detailing your experience.

So what do you think? Do you think people even pay attention to promoted tweets? Are you going to try it out? We’d love to hear your feedback.