The Night the Lights Went Out in NOLA

Leave it to the snark masters of the internet to make a 34 minute power outage during Super Bowl 47 the most entertaining 34 minutes of the entire game. As a dyed-in-the-wool Atlanta Falcons fan, I’m still sulking from our defeat to the 49ers a couple weeks back, so while I had the game on in the background, I wasn’t too interested. And then the lights went out in the Super Dome. 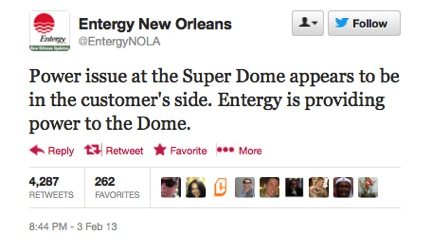 I immediately jumped out of my chair, ran to my computer, hopped on Twitter and spent the next 34 minutes laughing and being thoroughly entertained. There was plenty of blame being thrown about, from Bane in Batman The Dark Knight Rises lurking somewhere to Beyonce and Destiny’s Child sucking all the power out for halftime. One of the most entertaining aspects though was the quickness with which some brands capitalized on the blackout. A few honorable mentions go to Walgreens, Jim Beam and Audi. Entergy, the power company that powers the Super Dome, was also quick to take to Twitter, just to make sure everyone knew it wasn’t their fault. 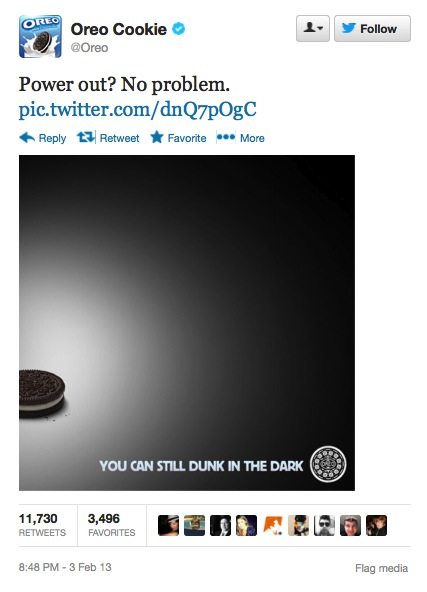 But perhaps the quickest and best to take advantage of this unique marketing opportunity was Oreo cookies. They’d already paid who knows how much to have a commercial that aired during the big game, but why stop there, especially when it’s free? So someone at Oreo who’s pretty quick on the uptake created a quick and simple but very effective graphic that was then tweeted out to the world. It was then retweeted thousands of times.

In the end, the game was delayed, the Baltimore Ravens were the ultimate victors and I can barely remember a single Super Bowl commercial that cost millions to create and air. I will, however, remember the graphic that Oreo threw together in under a minute and shared on Twitter for nothing. So the next time you question whether or not social media can really make an impression, just think of Oreo and the Great Super Bowl 47 Power Outage of 2013.